Things here with the new puppy in Wisconsin are good. I just thought I’d drop a line to let you know that we all made it back home again. It took a little longer than it did to get down there, we made lots of stops for the puppy – no accidents in the car. He rode home on our girls laps (Emilie and Sydney) and did really well.

Our girls decided to name him Buddy. It was actually harder deciding on the name than it was picking out the puppy. Thanks so much for the day at your house. You had everything really organized and we felt right at home. The entire process from beginning to end went so smoothly and I just wanted to thank you for all your help.

Buddy has taken to crate training really well. We only had one “bad” night where he cried and now he sleeps in his crate all night with no problem. We took him to our vet on Monday the 11th and he checked out just fine. The staff at our vet’s office oooohed an aaaahed over him. Emilie and Sydney and I went to a little street festival close to where we live this past Sunday and I must have had 50 people (women and children mostly) stop us gushing and telling us how cute he was and asking if they could pet him. Buddy is quite the chick-magnet

We also had him at a family party on Saturday and he was the hit of the party. All our nieces and nephews LOVED him.

I’ll send you some pictures soon of Buddy and our girls!

Thanks for everything, hope all is well with you!
-Yvette G

Hi Angie and Dennis,
I just wanted to let you know how little Tucker is doing. I can sum it up in one word – GREAT! You both did such a marvelous job with him that housebreaking him has been very easy. He doesn’t mind the crate that we have for him when we have to leave the house and he’s sleeping through the night. He’s made friends with the Goldendoodle next door (at least 5 times his size!) and they play every day together. He already knows how to sit, lie down and come and we are working on roll over. A couple of times I’ve tried to let him out into our fenced back yard by himself and he stops at the threshold of the door and looks at me. If I don’t move to put on my shoes and coat, he puts his paw on my shoes to indicate that I should do so! He’s a smart little guy!
We have big pillows for him to sleep on in the various areas of the family room and kitchen and he seems to prefer moving from them to the hearth and then back again in the course of one nap.
Thank you so much for giving him such a great start – you AND your children.
Tom and Patty K.

P.S. By the way …. He LOVES the snow! I was worried about him and the cold, but he really doesn’t mind it at all! I usually freeze my backside off, but he’s fine!

Hi! I thought you’d like to know that Bear has beeen amazing at adjusting first to hotel life and now to Sandy and sleeping with her in their room. You did a fabulous job getting him started with training. He uses the “pee pads” easily and seems to know there’s a special place for this stuff. Thank you so very much. He’s just wonderful! We’ll keep you posted and send photos.

We had him at the registration desk with us as our 3000+ attendees came to our show and he was a tremendous hit, of course! I even gave your name to a couple of people who were smitten and now want to adopt a doodle as well! I told them they have to wait till fall and that was actually good timing for them anyway!

I imagine letting go of all the pups was hard on all of you, especially the girls– two, right?–so please let them know that we understand and that we’ll send pictures.

We survived our marathon drive back to Georgia from your house on 2/18. We made it home around midnight after 712 miles of driving that day. The puppy did great! She slept most of the way home with occasional food breaks and pit stops. We kicked around various names, but finally decided on Koko, obviously not for her color, but for your nearby city fo Kokomo. I took vacation the following week to spend with her and my Mother who came home with us for the week. I took Koko to the vet on Monday, 2/20. She weighed in at a whopping 7.2 pounds and checked out fine. I took her back again on the following Monday, 2/27 for shots, and she was up to 7.9 pounds. She loves to play with our 12 pound chihuahua, Poncho and with our cat Cali. She is ruthless with the cat, but Cali tolerates the abuse..Luckily Cali is declawed. Koko sleeps in her crate beside my side of the bed and is doing great with housebreaking … She has been sleeping through the night since about 2/23. She is a great puppy and we love having her. She is the 1st mini Golden Doodle for our vet. The vet said they have 2 full size Golden Doodles as patients. Thank you for your hospitality and for a wonderful little dog!

She made it home without incident- I think she is taking it all pretty much in stride and has managed her first meal and bowel movement (outside!!) pretty easily.

She is just beautiful–and full of licks and affection as soon as she got out of the crate at the airport! She seems to have an issue with seeing her reflection in a mirror that sends her into a barking tizzy and she’s not big on being left alone but so long as I let her be wherever I am, she seems pretty content.

Thank you guys so much for all your help throughout this process. I’ll send pics as she grows and feel free to use me as a reference.

We just wanted to let you know that Lilly’s little girl arrived safe and sound. We decided to name her Lilly too. She is the cutest puppy! We are having so much fun with her! She is a wonderful addition to our little family! We gave her a warm bath and fed her dinner and played with her and held her lots. She actually fell asleep in my arms tonight. She is now asleep in her kennel in our little boys bedroom. Thank you for taking such good care of her! We will send you a picture soon. We hope her mama is doing okay. Take care!

Beau checked out fine at the vet and he’s still doing GREAT!! We love him more every day!!

He went to his first puppy obedience class Tuesday night and can already do a few tricks!! He’s sooo smart and eager to please!

Thanks for a wonderful puppy, Glenda

Well, the first night seemed to good to be true so I thought I’d better wait the first full 24 hours to give you an accurate update!! Now that a full day has passed it’s really not to good to be true … He’s WONDERFUL!!! Pee’s outside, poop’s outside. Sleeps like a charm and plays like he’s been here forever!! You guys have done a terrific job with this puppy and I know that we are just the fortunate recipients!!

He is really doing great! The kids love him to the moon and back and fight constantly over who gets him!! At one point yesterday I couldn’t take it any longer and thought Beau may be getting tired of it too so I sent them all to their rooms and he just looked up at me and started crying …. he didn’t want them to go away!!! It was a precious puppy moment! Even our cat Nellie is doing well adjusting to him! Does this sound perfect? I know it!!

Well, thanks so much for giving us a great puppy! We want to stay in touch and keep you posted. He goes to the vet on Monday and I’ll give you an update then. 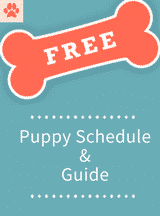